(The translation in English is below. Enjoy!)

“The best way to predict the future is CREATING IT”

During the past few months I have been reshuffling my finances and having a good look on what I am spending and selling some of the stuff I do not use anymore (and it is in good condition to sell it – stuff that I would buy if I see it -).

Of course, my not so little one can see me doing this selling – taking pictures, writing something down, putting the items aside, packing them and subsequently posting them – and now we hit that stage where he asks why.

“Why are you taking pictures?” “Because I am going to sell it.”

“Why are you going to sell it?” “Because I need the money; because I do not use it any more”.

“Why do you need the money? Why you don’t use it anymore?”

“I need the money to pay my debts. I don’t use it anymore because I feel it is time for it to go to a good home.”

You can imagine how the conversation goes. Sometimes it is difficult to end it and to put a stop to it without loosing my cool.

When I first started to sell my things – the ones I don’t use, the ones that I love but hey, I must – it was hard and somehow uncomfortable to talk about debt, money and savings with my son. I feel I did not want to ruin his innocence and the magic there is in childhood with the cold hard truth that money does not grow on trees. But then again, it does not grow on trees.

He does have the concept of getting a coin because he does a chore around the house. He does have the concept of saving and using his coins to buy something he wants. He still does not understand that I must go to work so I get paid. That the money I get paid sometimes is not enough. Hence, I must boost up and sell my books, my clothing, my music.

I wonder if I am giving the right example. I wonder if I could ever explain to him that I am paying my financial mistakes (heavily). But in the other hand I want him to understand , leading by example  that financial issues wont resolve by themselves and he will have to own them. You may wonder if he is too young for it. I give you an example that shows he is not and every occasion is good enough.

Say he got some well-earned coins from helping around the house – with tasks suited for his age and capabilities. He decides to take them with him because he had seen something at the local supermarket, and he is desperate to get it. As an adult you may realise that the thing he wants to get is just plastic and it will last less than 24 hours.)And sadly you will be right).

You advise it would not be the best investment and it will break in no time. You show an alternative, but he is set on his decision. I go with it. He is happy because he paid for it and the lady at check out gave him loads of praise for being such a big boy, whilst I remind him, he needs to get the change.

We get home, he plays with said item and…it breaks. I am tempted to say, “I told you so”. I have to bite my tongue and swallow each word. Instead, I let him run through his frustration. Why I don’t do is allow him to just discard it and get on with something else. As harsh as it sounds, if it is broken beyond repair, and it’s not used to generate / create something new (he is quite prone to do such things) it does not go to a pile of toys. It goes in the recycling bin (it is plastic at the end of the day). He gets more frustrated because he just “binned” his acquisition and there’s no way around it because neither he nor me can fix it. And he is few coins down.

This scenario will repeat itself several times.

Until one day he brings his coins to the shopping trip and there it is a great box of Lego. He counts his coins and he do not have enough; he needs to carry on saving. I have to refrain to say “I can give you the difference” or just surrender to those puppy eyes and say “go on, I get it for you”. Hard as it is, he has to save up. I gently remind him that he could do one or two “extra” chores and that will add to his stack.  Fast-forward couple of weekends and he is at the supermarket with this pile of coins very proudly paying for his Lego box.

– Sometimes you waste money and it does not feel good, does it?

– Always get the change….

Basically, it says on the first graphic (the one with the boy):

“This is Paquito, (You put the name you want in English, to make it easy) he spends all of his afternoons until the small hours playing with the console his parents gave him, or listening to youtubers with the mobile phone his parents gave to him as a present. From that moment on Paquito does not bother his parents any longer, and his parents are now happy.

The second graphic (the one with the woman):

And she is Lucia (Again, put the name you want in English, to make it easy), Paquito’s teacher, who spends many afternoons and sometimes until the small hours writing reports and filling in thousands of forms for the School Authorities and Inspectors, because teachers are being blamed because Paquito does not pass any single test and he does not learn anything.

Any coincidence with reality….

It has been quite a long time since my last post. And yes, probably I did write the same words and I made the solemn oath to myself to write more often.

And yes, life happened and the blog got thrown right to the back seat together with my solemn oath and my will to write once a week or so.

Spring is finally here and this would be the third spring season on the blog. Funnily enough the daffodils pictured three years ago (http://thehappyboobclub.com/2013/03/17/the-first-daffodil/) are the same who decided to bloom first yet again three years later.

So, life happened. Finally I started my course on Early Years Education.  Finally I got a job working with children as an assistant. The place is fairly new and there are children from 6 months old to almost 5 years old.  Being an assistant I pivot from one room to the other  and I get to see the “ins and outs” of childcare and everything I am reading in books notes and lectures from my course I can put into practise – or not – during my work.

Needless to say I am learning so much and gaining so much experience that I feel I could write volumes. More than once I thought on writing on this blog about my day as a sort of cathartic experience but then again I am so intertwined with the confidentiality policy and child protection and child safeguarding that the idea soon became an illusion.

Not because of the name and shame – that of course would not happen – but because of the back-of-the-brain fear that my catharsis would fall into the wrong ears. Paranoid? Yes of course. I read “1984” quite a while back and it has become one of my desert island books and living with the world posed by Mr. Wells in the now is tough enough. Nowadays where EVERYTHING is readily available at the press of a button (or the slide of a finger) no matter how hard you try to hide, you will always, inevitably be found. Unless you decide to go wild and get rid of any means of communication even then you would not cease to exist in the virtual world.

Do not take me wrong. I think the advance in technology is beyond awesome and some good comes from it. I wonder – in the same way probably my parents did – what is ahead and what the future would be like for my son who uses a “Smartphone” as easy as I use a toothbrush. The innovations in technology are so embedded into us that we take it for granted and it is hard to go back to the good old paper letter instead of the fast email as a dear friend reminded me a few days ago when we were having a conversation using skype whilst she was in Argentina and I was in England.

This techno life we acquired – either by will, force and/or need – is unconsciously (or not) being transferred to children. Proof of this is not only the innumerable amount of parents who decide to switch from open dialog to Smartphone but the behaviours I see amongst children as small as 9/10 months old in my place of work.

As I said at the beginning being an assistant I hover around different rooms. Last week I had to assist in babies’ room and the babies were playing at length with different toys. Amongst those toys there were some that looked like a mobile phone made of wood with big coloured buttons and a mirrored surface (see picture, courtesy of http://www.toyshopuk.co.uk/brands/erzi). 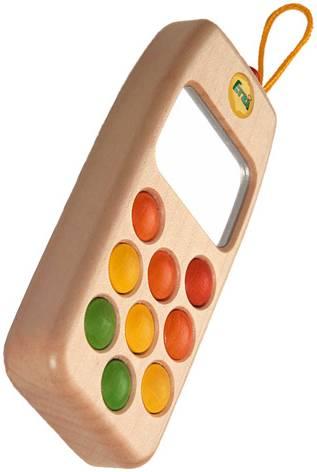 Anyway, time came to serve tea and of course all babies were seated round a table. Guess what? Two or three babies were having tea, with a pseudo mobile phone by their plates and they were pressing buttons and time to time picking them up whilst eating. Until I intervened and removed the objects from the table which of course caused some discomfort.

This is a picture that is ingrained in my memories and honestly it hurts. It is one of those things that it does not matter how many times you blurt it out, it will still be there. It raises so many questions. My main question is if these babies when they grow old and are fully formed adults would understand the deep value and meaning of a dialog face to face with another breathing human being either across a table or side by side when they grow up without having a screen in their hands.