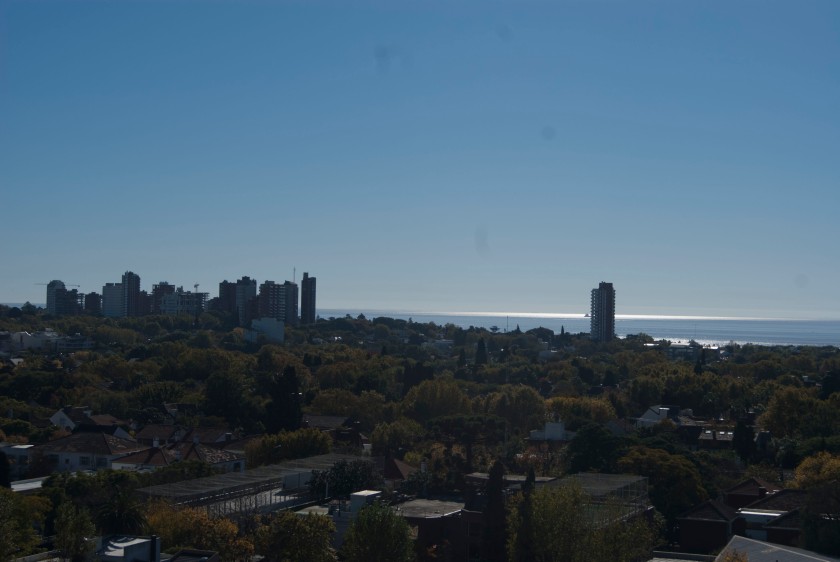 Sunny morning in Buenos Aires. At the back, the river Plate.
The view is from my mum’s flat.
Gorgeous, isn’t it?

If you answered yes to most of these questions, carry on reading!

Recently – say  a week  ago – I went through Heathrow T 5 on my own with my little one (6 months) to South America.  No need to explain that I was extremely anxious about the whole experience, the whole idea of a 14 hour flight was giving me the creeps, and for the two days prior to departure I was daunted by the task at hand and several times I thought about pulling out and changing the dates to a later stage when my partner could come with us.

Since I was travelling on my own with my little one, I decided to make my life easier, so I had  thought about  everything from the minute I arrived at the airport to the minute I sat on the plane.

I prepared the bag for my little one, with nappies, wipes, bottles, muslins, spoons (for his breakfast) and a change of clothing. And some toys for the journey, a blanket from home and another of his blankets. You may wonder why a blanket from home? Simple, because the cradles the airline provide are a bit flimsy and not very warm. Also my concerns were that on planes, normally they lower the temperature, and also I wanted my little one to have something that smelled like home.

Then, I prepared my bag: Laptop, camera, passports, a book, reading glasses, hairbrush, toothbrush, and a warm pair of socks, tissues and purse. Finito.

On a separate bag (a third bag) I put all the liquids that have less than a 100 ml (make-up, hand gel, hand cream, the small 90 ml milk bottle for my little one and a small bottle of baby lotion) all in a transparent bag, so when I got through security everything was ready to go, without the hassle of taking everything out of the bag, messing around with the stuff, you know how it goes.

You may wonder, on a 14 hour flight, will a 90 ml bottle of milk be enough?  Nah, I’m not that careless. Thing is, you can buy (it is called reserve and collect) all the baby stuff you may need for your journey online via Boots,  and pay and collect all the stuff once you went through security at the airport. Isn’t it wonderful? So, one worry less, I bought the 200 ml. milk cartons and a jar of fruit.

Well, the day came, all set to go, we arrived at the airport, after doing the check in (boarding passes were printed at home, so I only had to drop off the luggage and that’s it)  and after enjoying my last decent cup of tea until my return, I started my journey. Rivers of tears when I had to leave my other half, my little one was completely asleep so he didn’t realise what was going on.

Went through customs. Passports were handy, together with boarding passes. Check.

Went through security. Pulled the transparent bags from the bag, and the laptop. Check.

My little one was asleep. I had a wander through the Duty Free Shop, then a quick stop at Smiths to buy something light for me to read. Or at least to distract me for a while.

Finally the gate was announced. We got on the plane; I gathered up all the stuff and slowly, gently woke up my little one. I prepared everything so that when the plane takes off, my little one would be having some milk and would “forget” about the annoyance of the ears going “pop”.

He was so distracted by the lights that I would love to think he never realised what was going on. As soon as the plane got to a certain altitude, the cabin crew gave me the moses basket for my little one, I put the blanket from home inside and he sat there, until slowly but surely he fell asleep.  Believe it or not he slept for 6 hours and then I woke him up for a change and a feed; he fell asleep again for another 5 hours, until the first rays of sun appeared.

It was then when he became a bit agitated. I think he realised something was not  “normal” and that same thought probably left him exhausted, because he fell asleep whilst landing, and was asleep through the ordeal of customs and luggage collection.

The people at T5 were very kind and understanding. The people from security was very patient, I have to say the whole T5 was helpful through and through.

It *did* help big time that I prepared the bags and separated everything beforehand at home.

It *did* help to use the “reserve and collect” system at Boots.

I want to think that the blanket from home did the trick for my little one to sleep more comfortably.

As for me…well, exhausted. 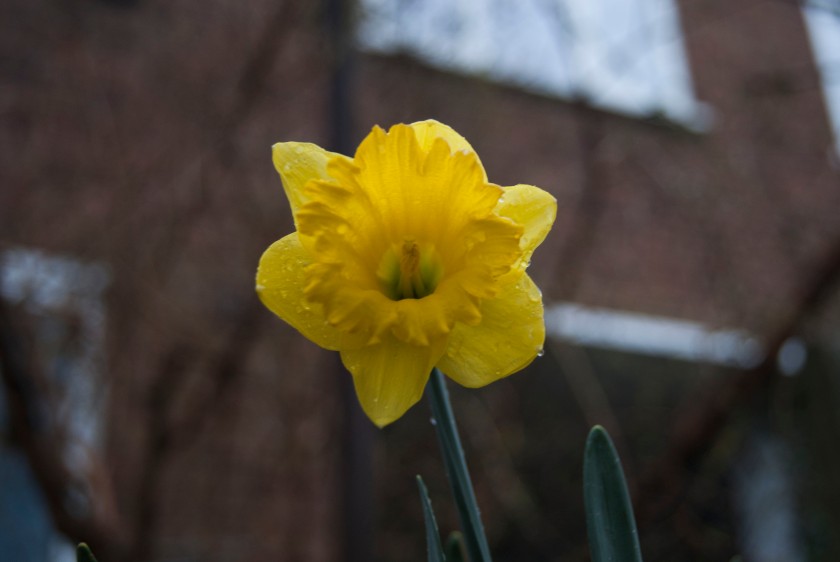 Grey sky. Doesn’t seem to stop raining. Cold. But here it is, the first Daffodil of the year. A sure sign that spring definitely is on it’s way.
Happy Sunday. Happy week!